**WARNING** This is NOT a quick project. You will need to start these at least 3 days before you want to use them. I started them a week early so that I would not have to stress if a couple broke...which they did.


First - You need icing. This took me several tries to get the right consistency. You need a medium thick (too thick and your lines will break) consistency for the piping and a thin (too thin and it won't stay where you put it) consistency for the filling. Fill a piping bag with the thicker royal icing and put a Round tip on it. I suggest #4 or 7 round tip on it. I tried it with a #2 first and they were just too thin to keep the flooding in.


Two - Lay out a piece of Saran wrap. You could use wax paper but it will be harder to see through to trace your pattern. Then coat the Saran wrap with shortening so it's very greasy. This will help you remove the butterflies with as few breaking as possible when they are dry.

Three- Take a pattern (this can really be anything) and trace the pattern with your thicker royal icing. It doesn't have to be perfect, but if the two sides match, it helps them look better in the end. Do not throw your thicker royal icing out. You will need it again later. jut put it in the fridge with a damp cloth over the tip. 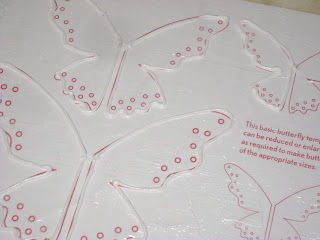 Four- Remove the pattern from under the Saran wrap. Let these dry overnight. I would like to be able to tell you less will still work, but that would be a lie. If they aren't completely dry before you flood - they will break. True. 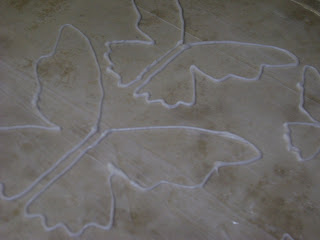 Five- okay this is the fun part. Make some very runny royal icing, and color it. Do not put it in a piping bag. Keep it in the container or bowl you made it in. Take a toothpick and dip it into the icing. It should cling to the tooth pick a bit. Then carry the tooth pick to the butterflies and flood them. Basically just swirl the toothpick around inside the butterfly out lines and repeat till totally flooded like below. 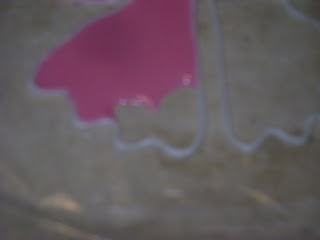 Six - LET THEM DRY. COMPLETELY. Again - overnight it best -maybe longer depending on how thick they are. Mine went over night and then all the next day. 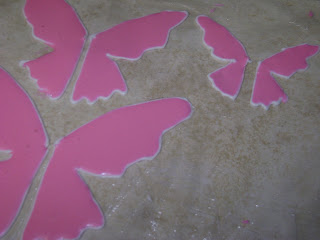 Seven - This part is fun!! You get to make them PRETTY!!! Use the same icing you used for the outlines. You can do dots, or squiggles, or swirls, or anything else you can think of. Let them dry.


Eight - After they are dry very carefully remove them from the Saran wrap - then set aside. Take a piece of heavy paper (I used regular card stock) and fold it like an accordion so you have peaks and valley. Take another greased pieces of Saran wrap and lay it over top of the paper and press it down in the valley so it has peaks and valleys also.


Ten - Take your Wings and very carefully (they are SUPER fragile) press them into the line you just piped. 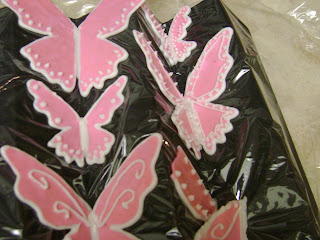 Eleven - After you have constructed each butterfly you can pipe bodies and heads on top of the center line you made to stick them together. This will help them be more secure. Leave them on the Saran wrap on top of the paper and let the bodies dry completely.
I told you they were fragile. 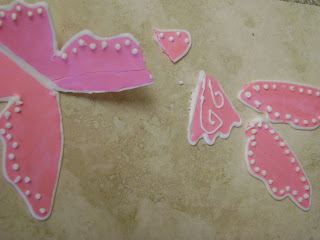 Twelve - carefully remove them from the Saran wrap. You're DONE!! 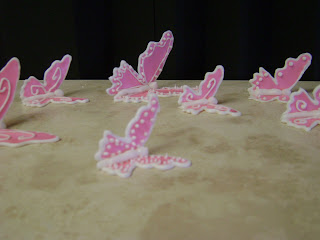 To add them to a cake simply pipe a dot of frosting onto the cake and press the butterfly into the dot. 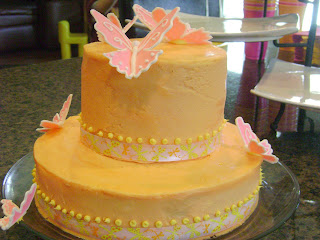